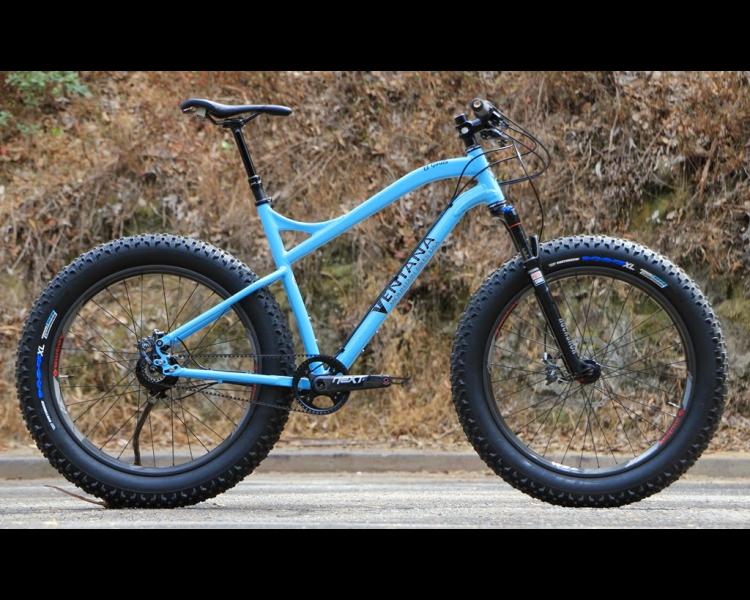 We were very excited when Rohloff called at the start of the summer to tell us they were sending us a pre-production sample of their new fat bike-specific SPEEDHUB XL. We had learned they were considering producing this 170mm wide hub only a few months prior, and now prototypes had already been built and tested and they were on to a pre-production run. Our sample hub showed up a week later and we marveled at how it dwarfed the standard SPEEDHUB 500/14.

The only problem on our end was finding a frame to use to build the new hub into a bike. Since we don't get snow in the San Francisco Bay Area, we planned to set the bike up for trail riding, which has become an increasingly popular use for fat bikes. This meant that the bike would be getting a suspension fork and dropper seatpost. It also needed to be belt drive compatible since we prefer the maintenance-free aspect of belts. 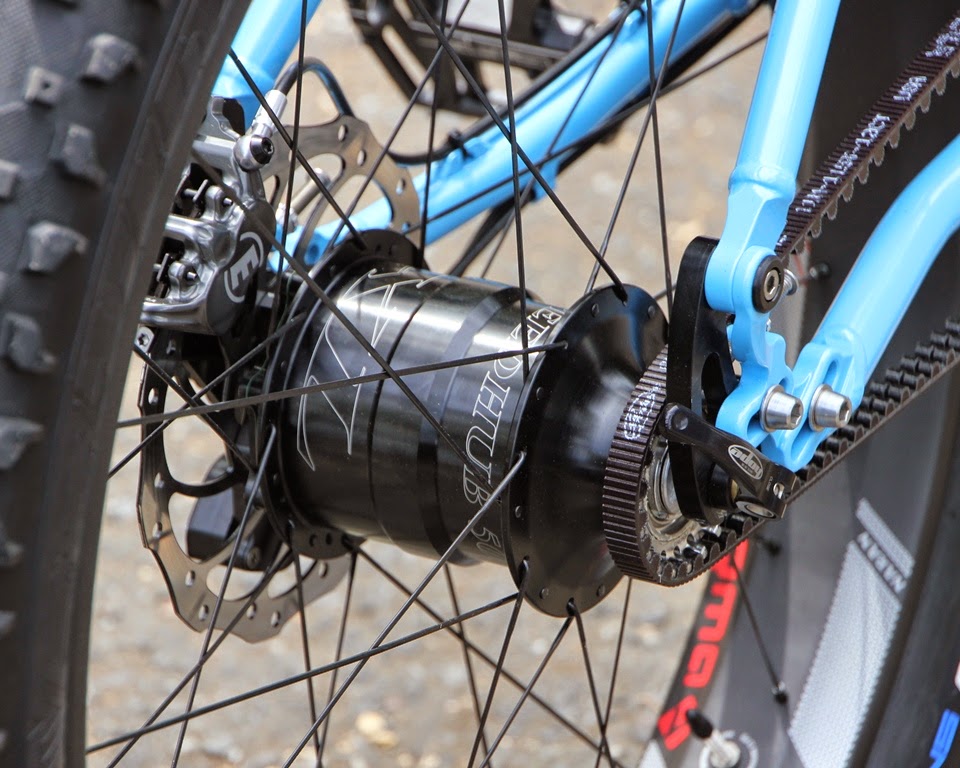 We had a perfect frame design in mind for this project, but it was not readily available from any frame manufacturer, as is often the case when we're working on a bike project. We considered having a custom steel or titanium frame built but decided that the lead time would be too long. Then we remembered Ventana's El Gordo frame, which looked great but had never been a Rohloff-compatible option in the past due to its wider dropout spacing. Now, with Rohloff's 170mm-spaced gear hub, this frame looked like a good match.

Ventana has been building high-quality aluminum mountain bikes – mostly full suspension and tandem frames – here in Northern California since 1988, and we have the utmost respect for their craftsmanship. Knowing that Ventana offers custom and semi-custom frames with the fastest turn around of any builder we work with, we contacted them to talk about a collaboration. 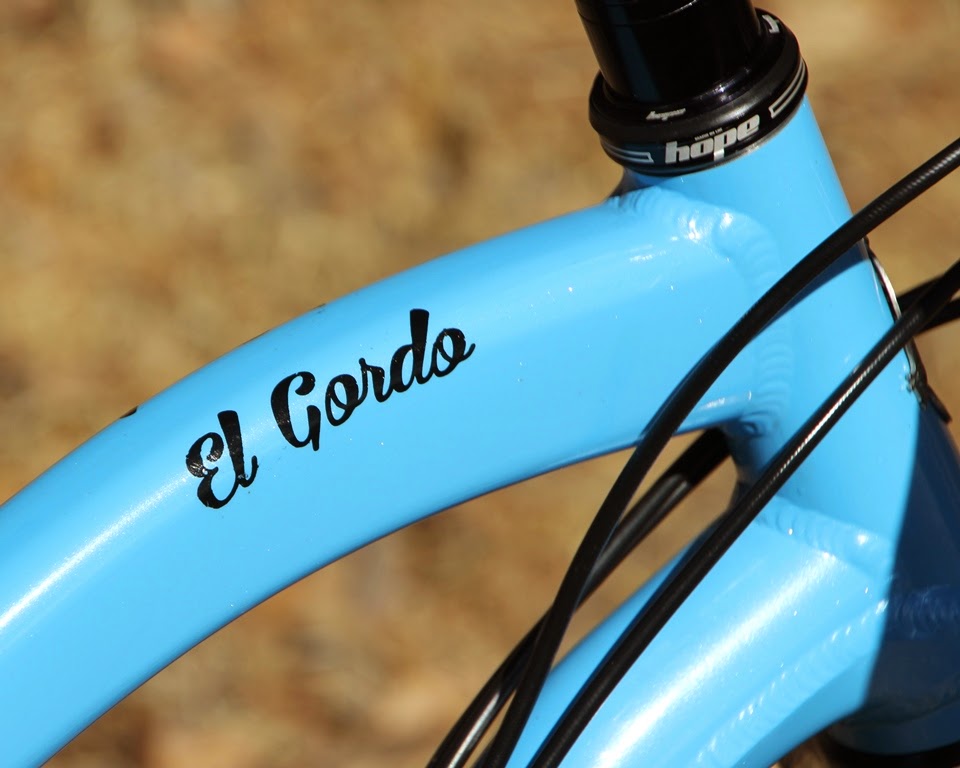 Their stock El Gordo fat bike frames are offered in 170mm or 190mm widths and feature their clever belt-compatible adjustable dropouts. The tapered head tube will accept a Rock Shox Bluto suspension fork, and the head tube angle is fairly slack for a hard tail at 69 degrees, which should make it fun on the trails. The 30.9mm seat tube makes it compatible with most available dropper posts, including our two favorites – Rock Shox's Reverb and Thomson's Elite Dropper. Only a couple small details were missing: Rohloff-specific cable routing and a cable exit port in the seat tube so we could run the internal cable version of either dropper post. After a visit to Ventana's factory to hash out these details, they set to work on a special Cycle Monkey edition of the El Gordo.  We received our first sample of this frame last week and immediately built it up. 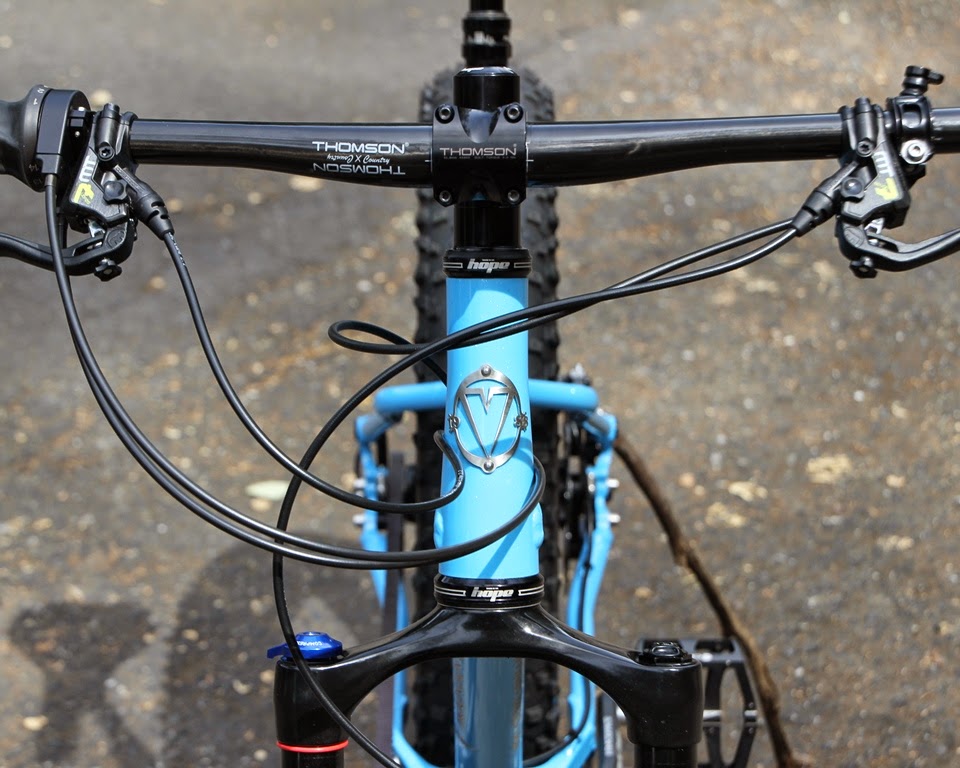 For the wheels, we used Sarma Bikes’ Naran 80mm wide carbon rims for plenty of flotation and traction with a Hope Fatsno front hub and the Rohloff SPEEDHUB XL in the rear. Sarma is a relatively new company based in Russia who's rims look very interesting. The Naran rims feature a double wall box section design for extra stiffness and a tightly woven outer layer to resist damage from wayward rocks. To finish off the build, we laced up bladed Sapim CX Ray spokes and alloy nipples to keep the weight down. Once the wheels were built, we mounted a pair of Vee Rubber’s massive Snowshoe XL tires, which have a 26x4.8” profile and an extra knobby tread pattern to grip in loose trails or snow. 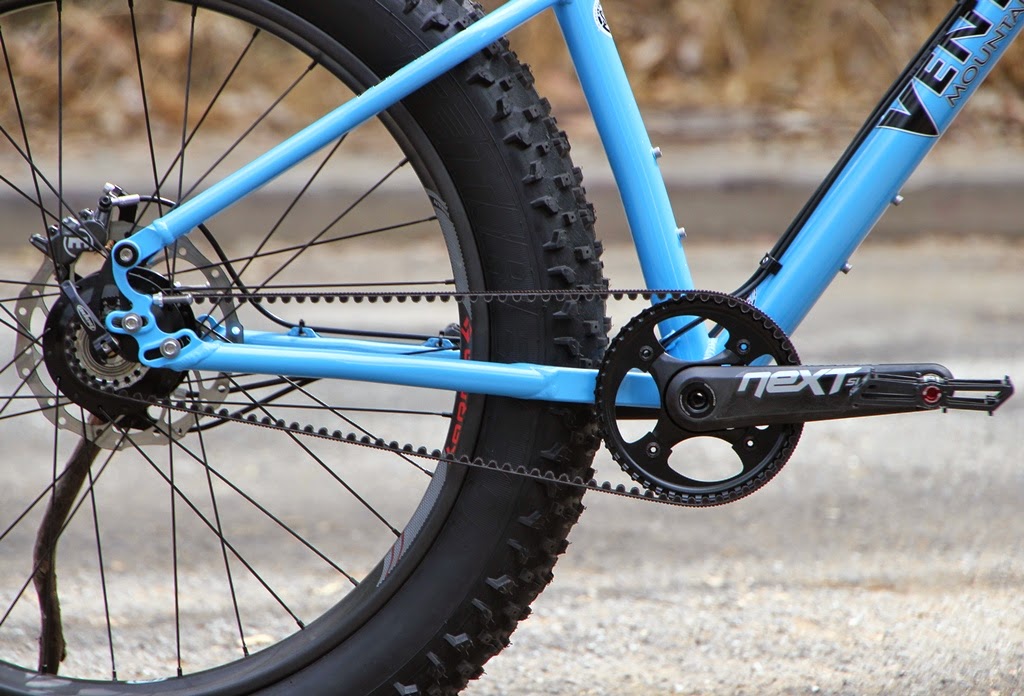 The Rohloff SPEEDHUB and Gates Carbon Drive drivetrain is ideally suited to fatbiking because of its durability and resistance to mud, dirt, sand, or bad weather that can pose problems to derailleur-equipped bikes. Fat bikes provide the capability to ride through sloppy and challenging conditions, from mucky river bottoms to sand-swept deserts. The SPEEDHUB’s shifting components are all sealed within the hub shell instead of hanging vulnerably off the side of the bike. The gears also sit within a sealed housing, continually lubricated by an oil bath and shift smoothly every time. The only routine maintenance that the SPEEDHUB needs is an annual change of this oil bath. Until now, the SPEEDHUB was only compatible with fat bike frames that use an offset rear end with 135mm axle spacing, like the Surly Pugsley and Moonlander. However, the new 170mm wide SPEEDHUB XL brings Rohloff’s reliability to symmetrical 170mm frames, which have now become much more common than the offset frames. 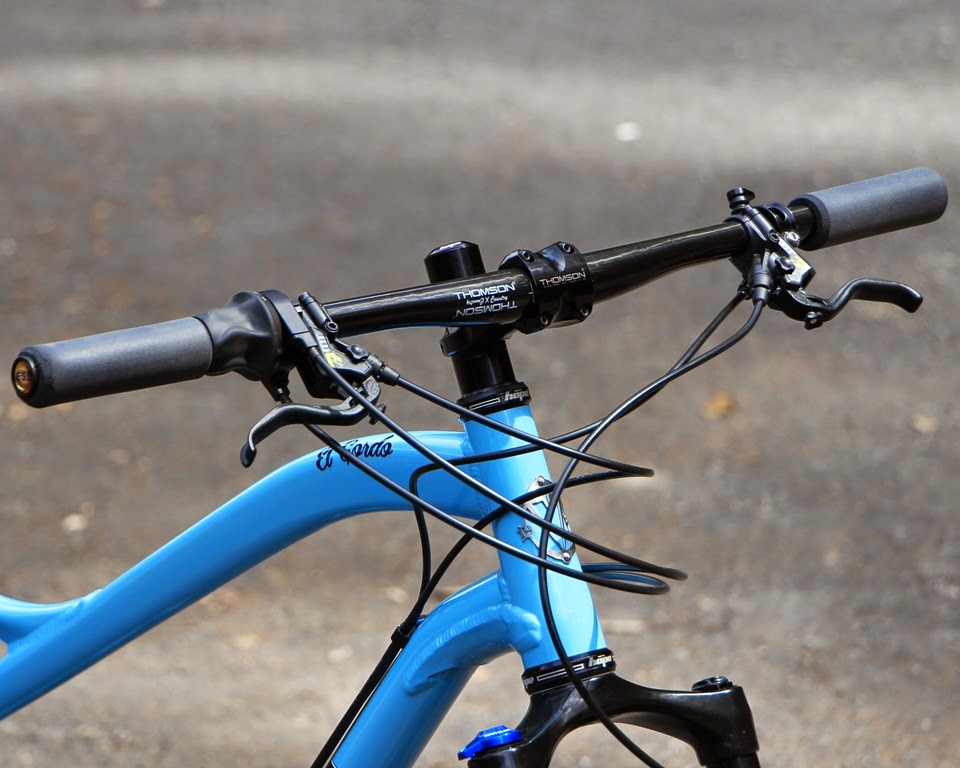 Keeping with the theme of a trail-oriented fat bike, we installed Rockshox’ groundbreaking Bluto fork. The Bluto is the first widely available suspension fork with clearance for five inch tires. It has 120mm of travel and uses the same general design as Rockshox’ popular Reba fork. With a major suspension manufacturer releasing a fat bike-specific fork, the Bluto is sure to open the floodgates for the popularity of suspension-equipped fat bikes. It will also open up fat bikes to be ridden on more aggressive types of trails. Along with the suspension fork, we installed Rockshox’ Reverb dropper post to easily get the seat out of the way on technical descents, and Magura’s MT7 brakes provide seemingly endless stopping power in a lightweight four piston design. 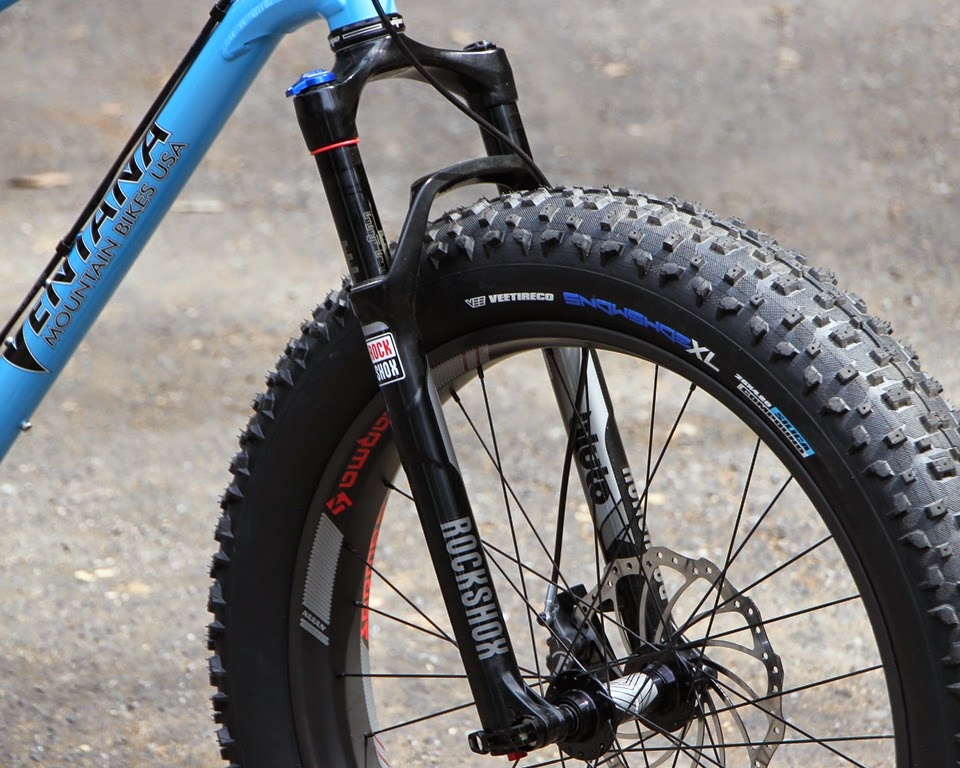 We rounded out the rest of the build with top shelf parts to keep the weight down for trail riding without affecting durability: Race Face’s ultralight Next SL carbon cranks, a mid-width Thomson carbon handlebar and shorter Elite X4 stem for balanced handling between climbing and descending, ESI's cushy "extra chunky” foam grips, and SQ Labs’ ergonomic 611 Active saddle, which has an elastomer under the shell that allows the saddle to flex slightly with each pedal stroke. 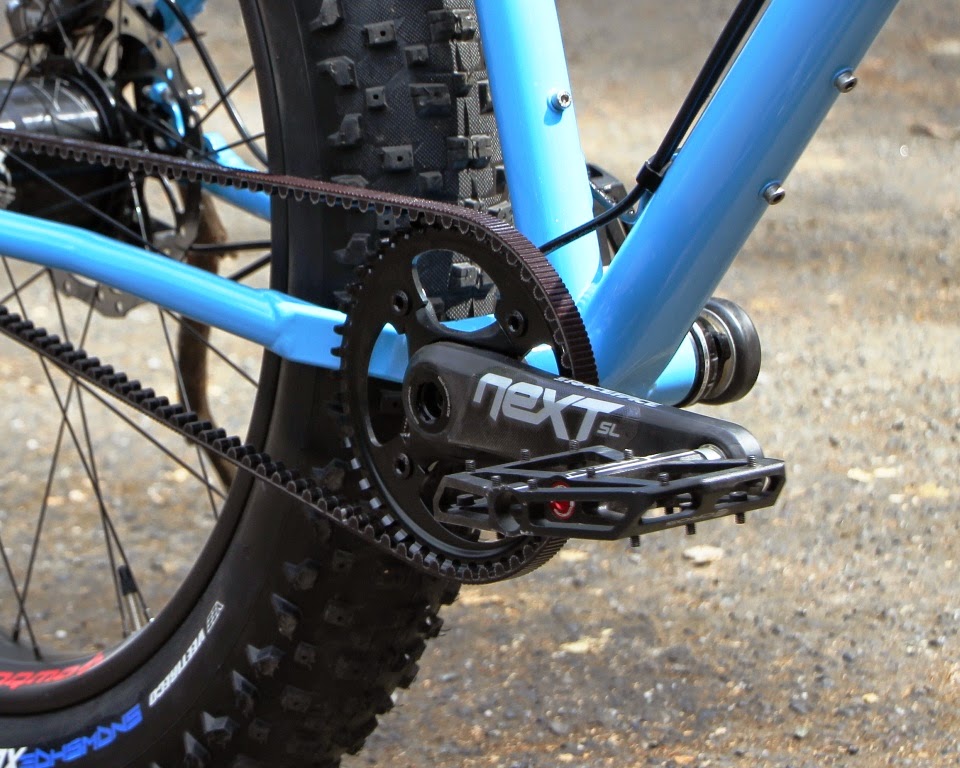 This bike’s total weight comes to 36 pounds, which is quite light for a durable fat bike with huge tires, a suspension fork, and a wide gear range. We will be putting it through its paces over the coming weeks and months. Check our Facebook page soon for a full ride report, and if you’re local to the Bay Area contact us to come by and demo the bike. For a similar fat bike build of your own with the new SPEEDHUB XL – or a wheel build alone – Look through our build options and contact us to see what we can put together for you.