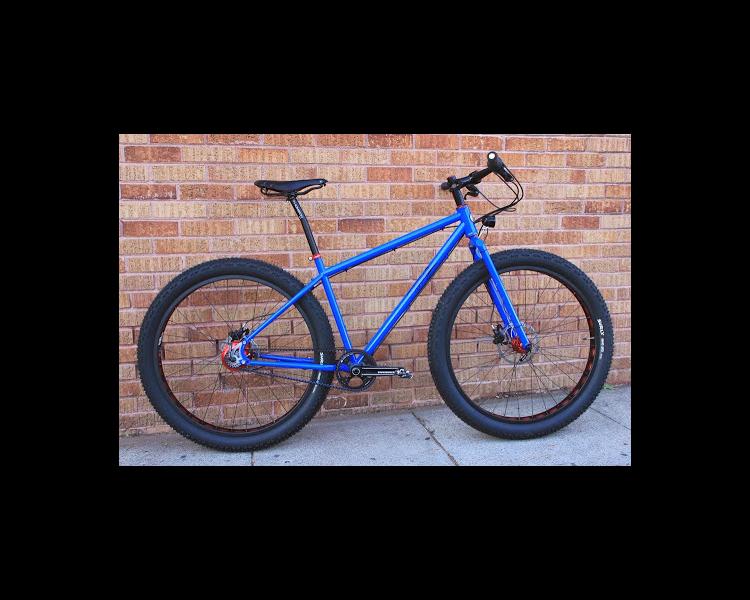 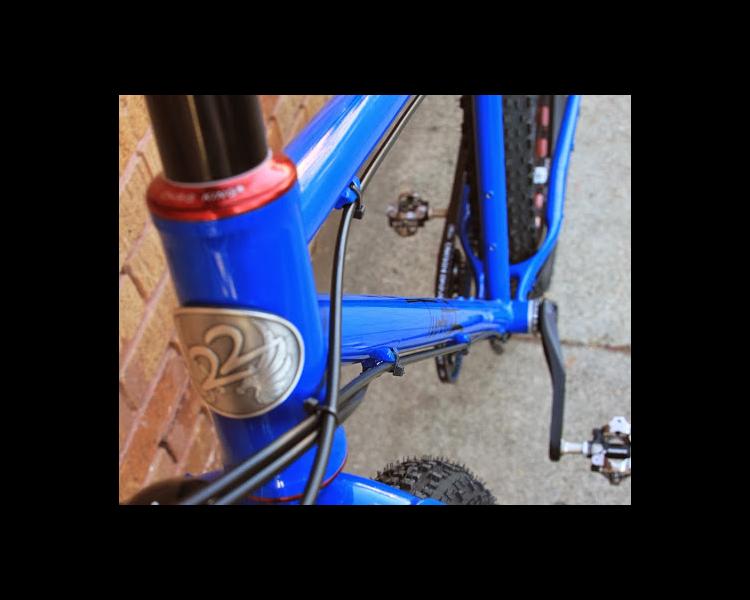 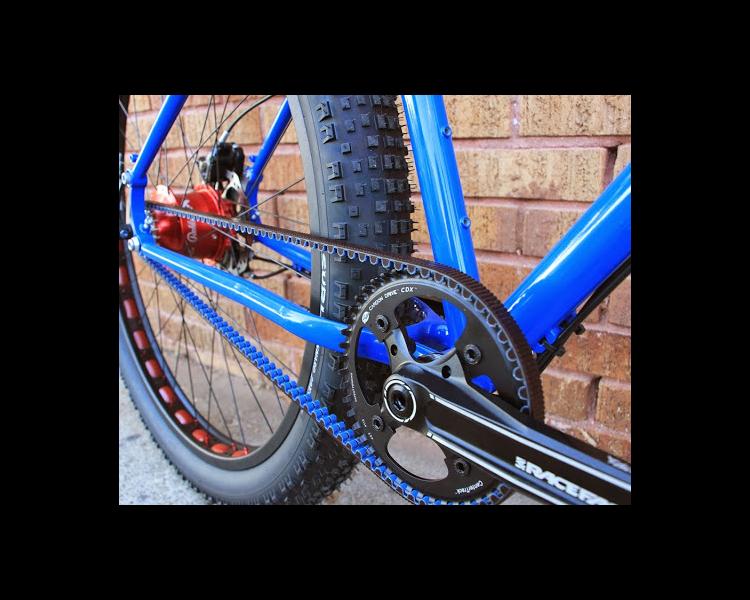 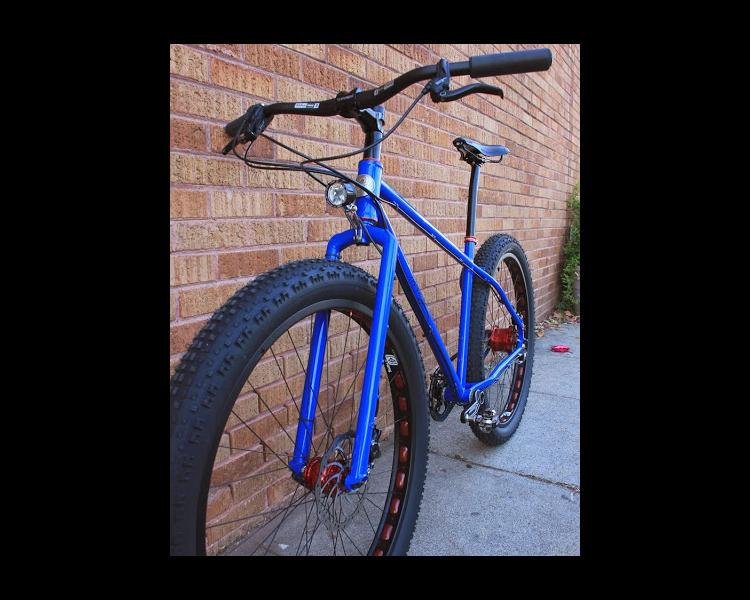 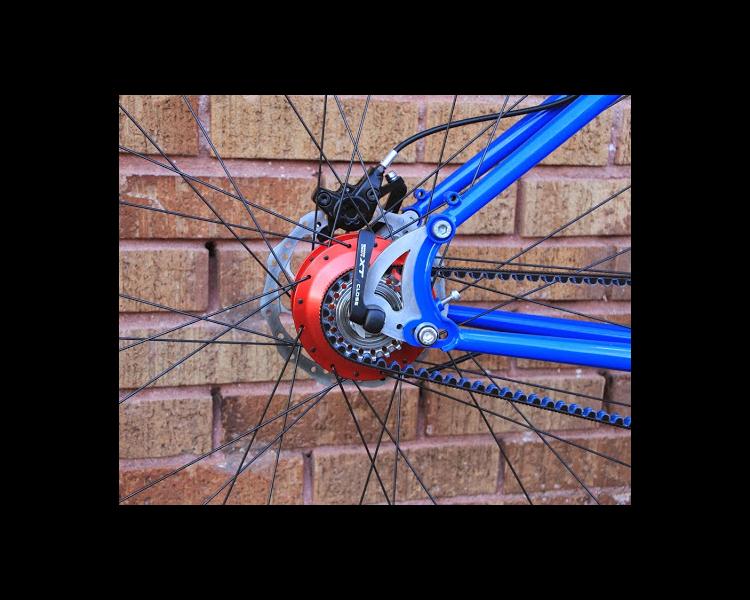 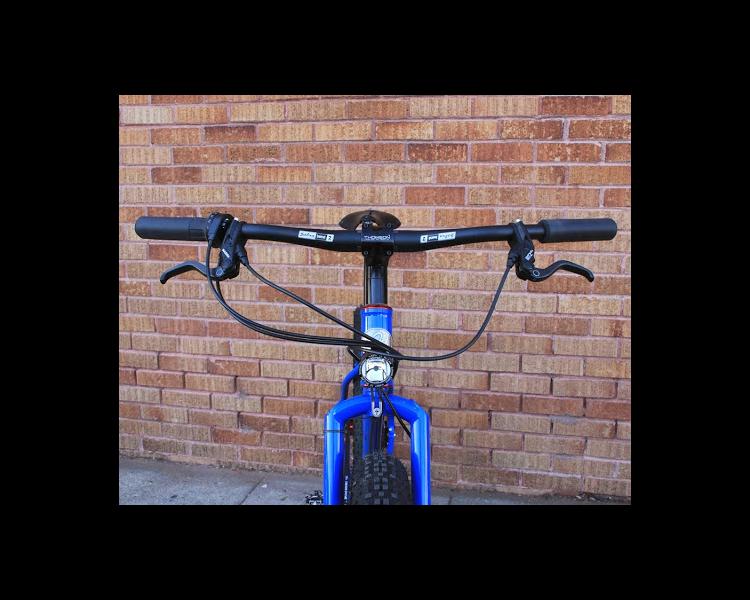 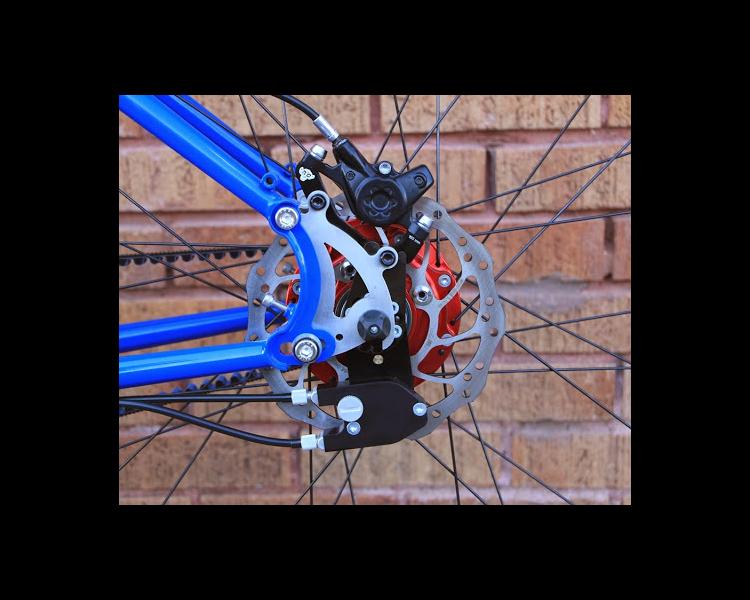 This eye-catching Twenty2 Cycles 29+ is custom-built for adventure touring but is also well suited for fast singletrack.This gorgeous Twenty2 Cycles frame is the latest in a handful of builds we have put together using the new “29+” platform. These bikes use three inch wide 29er tires mounted to 50mm rims, which provide ample float and traction like a fatbike, yet roll fast like a standard 29er. The “29+” bike designation was invented by Surly Bikes with their release of the Krampus model last year, and it has proven popular for bikepacking as well as fast singletrack riding.Our customer for this bike had owned a Rohloff hub for years, and it has been serving him reliably on his Surly Long Haul Trucker touring bike. When he decided he was ready to start exploring off road, he knew a Rohloff was in the cards for a new mountain bike build as well.For off-road adventure touring, the Rohloff/Gates belt drivetrain is unmatched. The robust drivetrain requires little maintenance and has no external moving parts to break or bend. When riding in remote backwoods areas days away from the nearest bike shop, the durability of your components is of utmost importance.  The SPEEDHUB shifts reliably time after time with no maintenance other than an annual oil bath change, and the Gates belt drive eliminates the problems of stiff or broken chain links.The Rohloff SPEEDHUB 500/14 and Gates Carbon Belt drivetrain is ideal for adventure touring.After strongly considering getting a Krampus, our customer instead opted for a custom 29+ frame. The deciding factor was the ability to design a belt drive splitter and a rocking dropout into the frame, which would simplify belt drive installation and tension. A stock Krampus uses a horizontal dropout and would have to be sent to a framebuilder to get a splitter installed. A custom model, on the other hand, would let him create a purpose-built frame with no modifications needed later. He would also be able to tweak the geometry to fit him perfectly. We decided to go to Colorado-based framebuilder Twenty2 Cycles for this frame because they are an existing customer of ours and specialize in creating Rohloff-equipped belt drive fatbikes. We worked with Twenty2 to nail down the geometry and other frame features; then they set to work building the frame. The frame incorporated the rocking dropout from Black Cat Bicycles and a machined chainstay wishbone junction from Paragon Machine Works. Before long, we had the glossy blue frame in hand ready to build up.Our customer was planning to get into bikepacking and adventure touring and was starting to plan a long off-road tour. He knew the 29+ design’s large tires and rims would provide plenty of stability and traction in a range of conditions. But, he also asked for plenty of braze-ons for racks and water bottle cages on the frame so that he could carry all the supplies he would need for a bikepacking adventure.At the same time, he planned to use the bike to rip around on the local mountain bike trails and wanted it to perform well and not feel sluggish. As such, the frame's geometry strikes a balance between the long wheelbase of a touring style bike and the quick handling of a cross country bike. With or without bikepacking gear, on singletrack or on fireroads, the bike is ready for adventure.Salsa Bend 2 handlebars, Magura MT2 brakes, and Thomson stem.For the rear wheel build, we used Surly’s 50mm wide Rabbit Hole rims and laced them to the SPEEDHUB using Sapim double butted Race spokes. The front wheel consisted of Rabbit Hole rim, same Sapim spokes, and a Schmidt generator hub to provide battery-free lighting on the trail. When the wheels were ready, we used our own Monkeybone to secure the SPEEDHUB’s axle plate in place. The red theme of the hubs was continued with the Chris King headset, Hope seat clamp, and Surly rim strips, making for a striking red and blue contrasting color scheme. We also opted for a Thomson seatpost and stem, powerful Magura MT2 hydraulic brakes, and a comfortable Selle Anatomica Titanico saddle.If you’re looking for an adventure touring bike that you can pack on the miles with, the SPEEDHUB/Gates drive combo will serve you reliably for years to come. This customer was very excited about how shiny and colorful his bike looked when he picked it up, but was also excited to go ride it hard and get it dirty. Call us to see what off-road adventure bike we can put together for you!Build Details:• Frame: Twenty2 Cycles 29+• Fork: Twenty2 Cycles 29+• Headset: Chris King• Stem: Thomson Elite X4• Handlebar: Salsa Bend 2• Shifter: Rohloff• Grips: ESI foam• Seatpost: Thomson Layback• Saddle: Selle Anatomica Titanico• Seat Clamp: Hope• Front Hub: Schmidt Generator Hub• Rear hub: Rohloff SPEEDHUB 500/14• Spokes: Sapim Race• Nipples: Sapim brass• Rims: Surly Rabbit Hole• Tires: Surly Knard 29x3.0• Cranks: Race Face Turbine• Pedals: Shimano SPD PD-M785 XT• Bottom Bracket: Race Face• Chainring: Gates Carbon Drive Center Track• Rear Sprocket: Gates Carbon Drive Center Track• Chain: Gates Carbon Drive belt• Brakes & Levers: Magura MT2• Rotors: Magura Storm• Extras: Schmidt Edelux front light