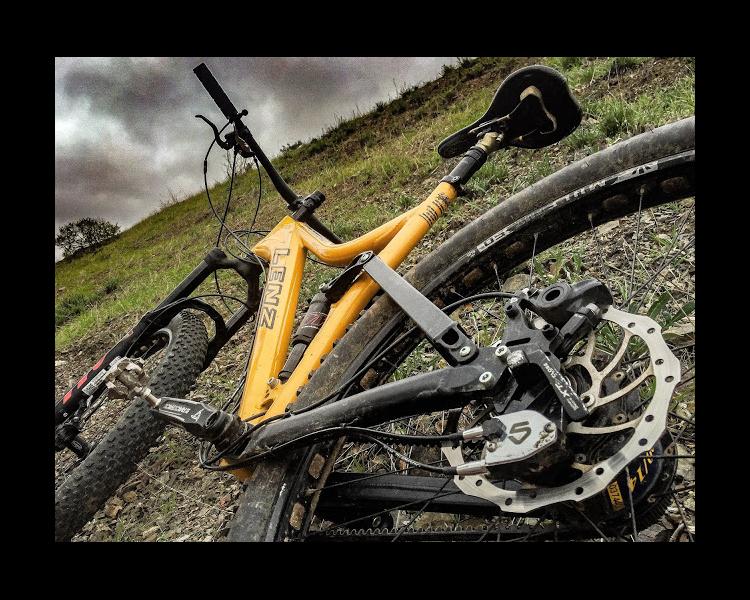 During the past 8 years representing Rohloff in the US, I have received many requests for a trigger shifter for the Rohloff SPEEDHUB 500/14 and fielded lots of questions about whether it is possible to connect stock derailleur shifters (road and mountain) to these internal gear hubs, both of which were not previously possible.  This has changed over the past year and a half with the introduction of the Cinq5 Shift:R and Gebla Rohbox.  Now that these shifting options are available, we have seen strong interest in them, which has led to new questions about how they work mechanically and how well they function out on the roads and trails.

After using the Cinq5 Shift:R trigger shifting system on my mountain bike over the past 4 months, I feel like I have a pretty good feel for the shifting performance of this system.  Also, after visiting the Cinq5 factory in Southwestern Germany last fall and getting a detailed overview of how to install and service them, combined with the installs we have done at the Monkey Lab, I feel like I have a good understanding of their inner workings.

In this post, I will give some background on the history of trigger shifter designs for the SPEEDHUB and discuss the pros and cons of the Shift:R as they apply to my riding as a long time mountain biker and SPEEDHUB rider. Look for a future article covering the Gebla Rohbox after I have spent more time on it. 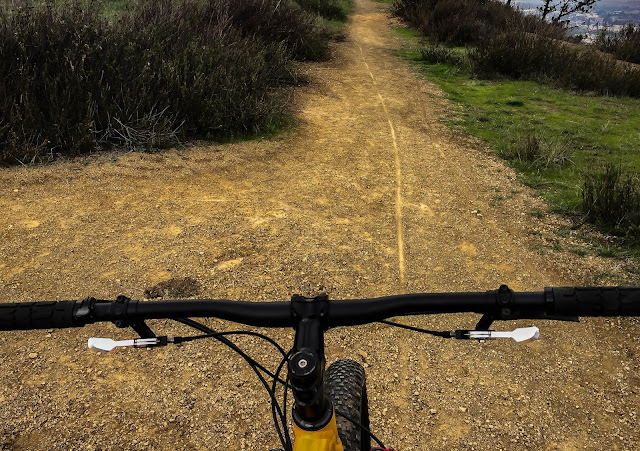 Rohloff has only offered a twist shifter to control their internal gear hub since bringing it to market in 1998. A twist shifter is easy and inexpensive to make, offers fast shifting, and is very durable.  This makes it is a natural fit for these hubs that have been proven to hold up after over 120,000 miles (200,000km) and takes advantage of the hub's ability to shift without pedaling.  At the time the SPEEDHUB was released, GripShift was still widely used on mountain bikes, so the Rohloff twist shifter wasn't an uncommon way of shifting.  Since then, mountain bikers, bicycle tourists, and commuters have switched almost exclusively to using trigger shifters with other shifting systems.  As this transition happened, there was more and more call from prospective SPEEDHUB riders for a trigger shifter.

Over the past 17 years, there have been several attempts to build a trigger shifter for the SPEEDHUB both internally at Rohloff and externally by customers and inventors.  All of these prototypes were too large, too heavy, or too complicated to manufacture without being overly expensive.  Unlike a derailleur system and most other internal gear hubs, Rohloff's shifting mechanism uses two shifter cables instead of one and has an indexing mechanism in the hub instead of the shifter.  Additionally, there is a large amount of cable pull required to cover the 14 speed gear range, and the combination of these factors proved to be a significant challenge for designing a trigger shifter.


Shift:R is the first trigger shifter to market for Rohloff's SPEEDHUB 500/14 internal gear hub. Released summer 2014, Cinq5 managed to create a compact, lightweight trigger shifting system by thinking outside of the box and using a system-level approach that while not inexpensive, is far less expensive than some of the previous designs would have been had they gone into production.  The system is comprised of two shift levers - one for each hand, with one shifting into a harder gear and the other into an easier gear - and a ratchet box that connects to the external shift mechanism, replacing the Rohloff cable box.  The shift levers are simple spring loaded levers that pull and release a small length of cable, with the ratchet box being the heart of the system.  The ratchet box allows the shift lever to pull the small amount of cable, advance the SPEEDHUB to it's next gear, then release and reset.  The system allows 1-2 gear changes per lever throw (2 when shifting in the same direction, 1 when changing direction due to the backlash in the system).  Two sizes of shifter clamps are available to fit the shifters onto a flat bar (22.2mm) in the normal trigger shifter location or on either side of the stem on an oversized drop bar (31.8mm). 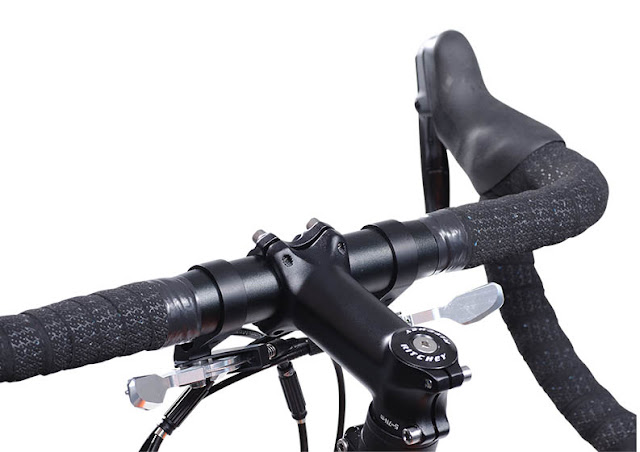 With 13 years of near daily riding with the Rohloff twist shifter, the triggers took a little getting used to.  At first, I instinctively wanted to use the right lever to shift in both directions because this is the side that my twist shifter sits on.  Over the past 3 months, this has become a less frequent occurrence, but it still happens once in a while - old habits die hard!

With the current trend of 1x derailleur systems training riders to only have one shifter (or with Rohloff's twist shifter) leaving the other side of the handlebar open for other control levers like a dropper seatpost, having two shift levers with Shift:R adds some complication/clutter to the bar. Riders used to having two trigger shifters will not notice any difference. I have found that using the Shift:R with wet, slippery hands is much easier compared to the twist shifter.  With the twist shifter, the rubber grip can become very difficult to grab onto and rotate when wet, especially without gloves, when the rubber grip is worn, and/or the shift cables have some contamination that requires additional shifting force to overcome.  Wet hands have no impact on being able to shift with Shift:R - you simply push the lever forward and the system shifts.

I have also found that shifting is slower with Shift:R compared to the twist shifter.  I am accustomed to changing multiple gears rapidly when transitioning from a high speed descent into a steep climb or when coasting through a corner that I need to pedal out of.  With the twist shifter, you can easily shift through as many gears as you want in one quick motion.  With Shift:R, I find myself starting into some climbs still trying to shift into the climbing gear I want while my thumb tries to keep up.  The trigger system will get me where I need to go, but it takes longer and requires multiple lever pushes.  It is still manageable, and I suspect that riders who are not familiar with the twist shifter would never notice this, but having used the twist shifter for such a long time, it stands out to me.

One thing I noticed when using the Shift:R (or the Gebla system) is that the leverage of the trigger makes it is easier to accidentally shift the hub into an "in between gear" where a clutch or pawl isn't fully engaged and you experience loss of gear engagement.  The slower shifting speed also compounds this issue, which is much more difficult to do with the twist shifter.  In my 4 months of using Shift:R, I only experienced this problem occasionally and almost always when making a lazy shift.  Using quick, purposeful lever pushes achieves the best shifting results. 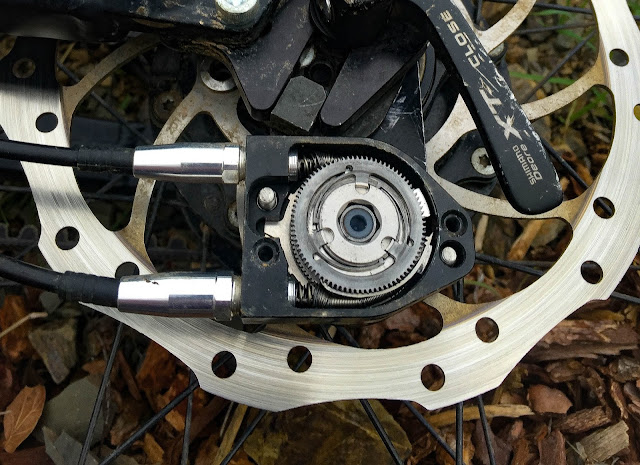 Performance of the Shift:R has been trouble free so far, but proper installation is critical.  This is where my biggest concern lies.  The inside of the ratchet box looks like a watch, with small, fine ratchet teeth and a rather delicate engagement claw with matching fine teeth.  The Shift:R come out of the box with cables installed, which means that in most cases you don't need to access the inside of the ratchet box initially.  However, if you mis-cut the cables or otherwise need to replace them, you will need to get into it.  To do this, you will need to disengage the ratchet mechanism to separate the cable carriers.  There is a very easy way to disengage the ratchet using a hook tool built into the cover of the ratchet box, but without knowing this, you will instinctively want to hook a finger nail or small screw driver under the tip of the engagement claw, which can easily bend the claw and cause the ratchet to stop working.  Before removing the cover, make sure to unscrew the barrel adjusters completely to allow the coil return springs to slide out and not fight you while you are trying to replace the cable(s).  This is definitely a situation where you should read the manual before getting started!

The other critical factor in proper installation is that the cables are not too tight.  You can use the barrel adjusters at the shift levers to remove free play in the lever throw to get a quicker, more positive shift, but if you go too far, you start to disengage the ratchet on the opposite side and the shifter on the opposite side stops working.  When this happens, you'll hear a grinding noise and maybe a popping sound/feel as the only partially engaged ratchet teeth pop apart. Unchecked, this will lead to damaging the ratchet plate and/or ratchet claw as the teeth on each piece skip over each other.  Bottom line - if the ratchet doesn't engage on one side, loosen the cable on the opposite side.

Once installed correctly, we have not seen or heard of any issues with the Shift:R. All issues that have been reported so far have been traced back to either damaging the ratchet claw when replacing cables or damaging the claw or plate teeth due to having the shift cables too tight.

Overall, the Shift:R system has worked as advertised, shifting through the gears in my SPEEDHUB reliably.  As a long time twist shifter user, there is a learning curve to using the triggers, but having them as an available option has been very exciting for many of our customers.  The potential for damaging the ratchet box while replacing cables or by having the cables too tight concerns us, but once installed properly, the system feels solid and has not given me any trouble.  Cinq5 assures us that the system is well tested and can handle loads significantly higher than the force of a rider's thumb and stands behind their products.  At $360 for the system ($260 as an add-on with a SPEEDHUB purchase), Shift:R won't be for everyone, but we think it is a viable consideration if you are looking for an alternative to using a twist shifter.

If you are interested in seeing more of the alternatives to the twist shifter that we offer at Cycle Monkey, check out our blog: Tech Talk: Shifter Options For Use With Rohloff SPEEDHUB 500/14