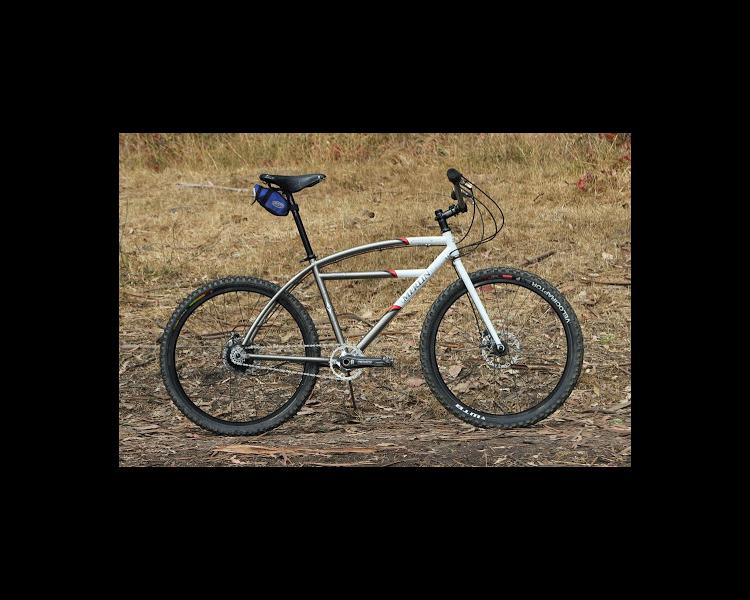 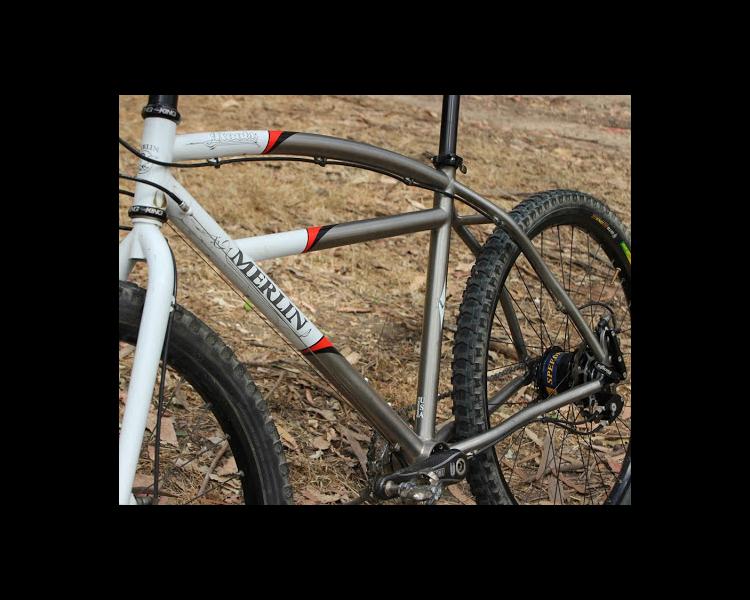 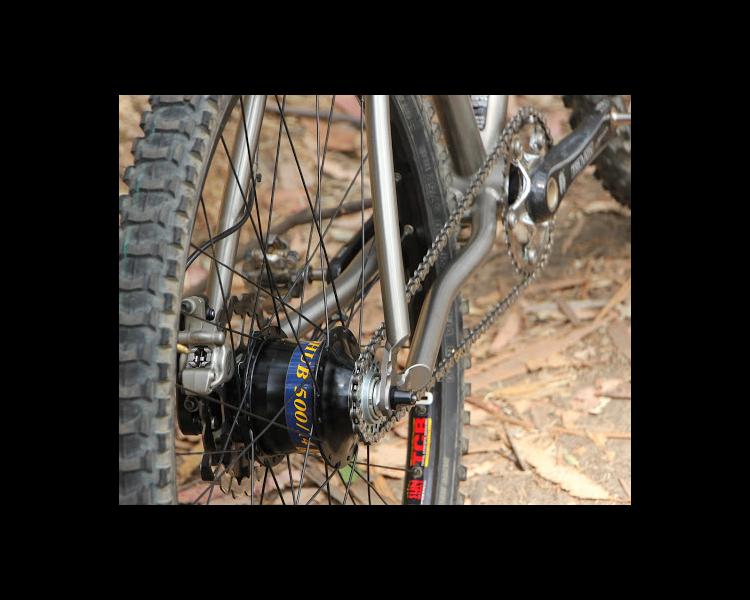 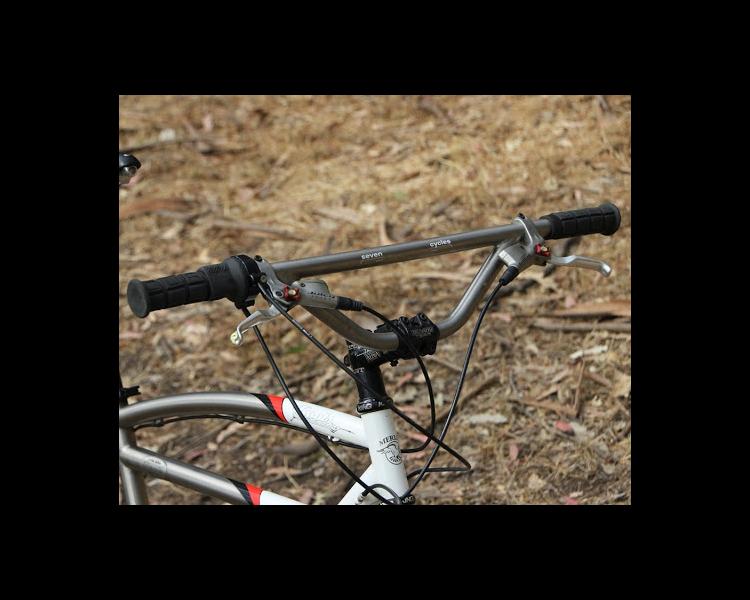 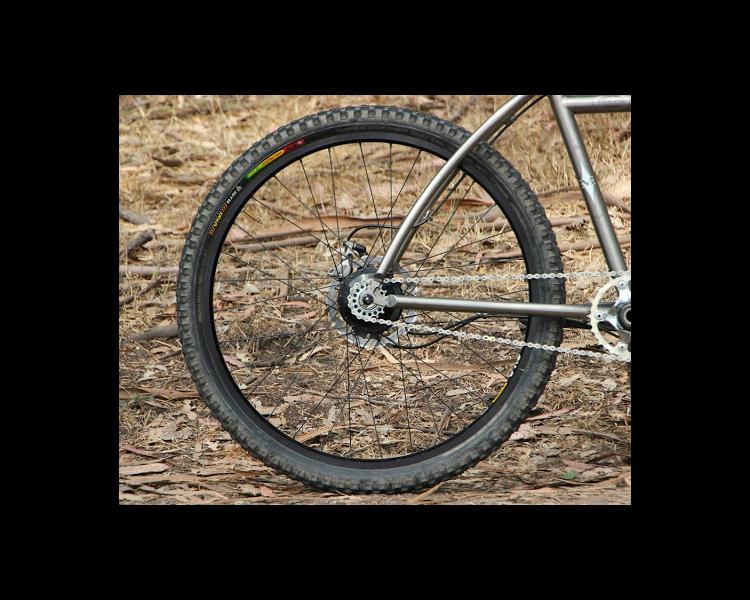 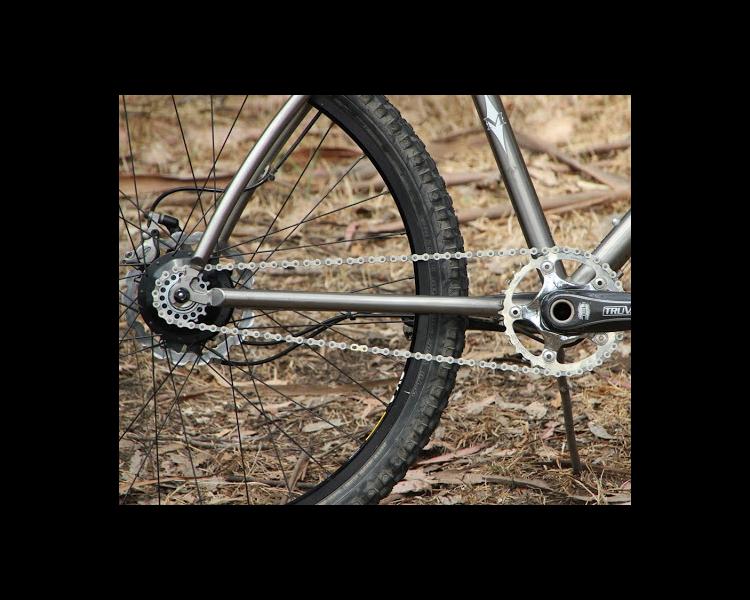 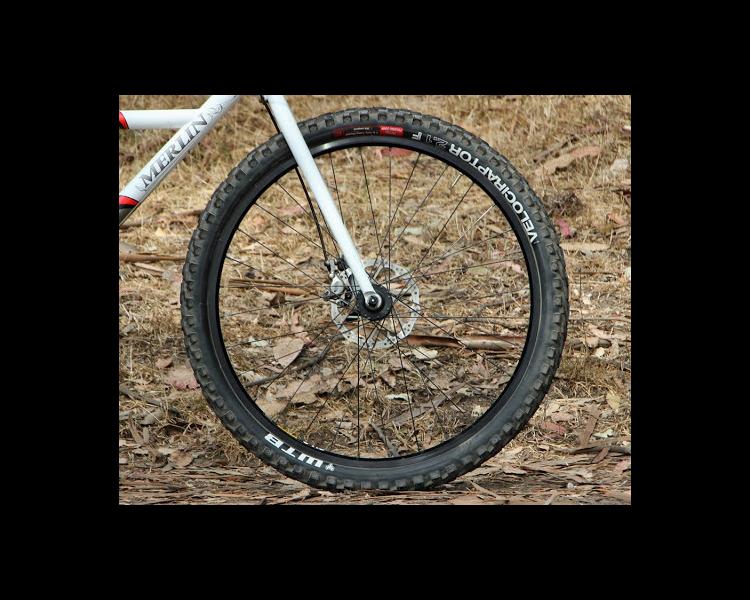 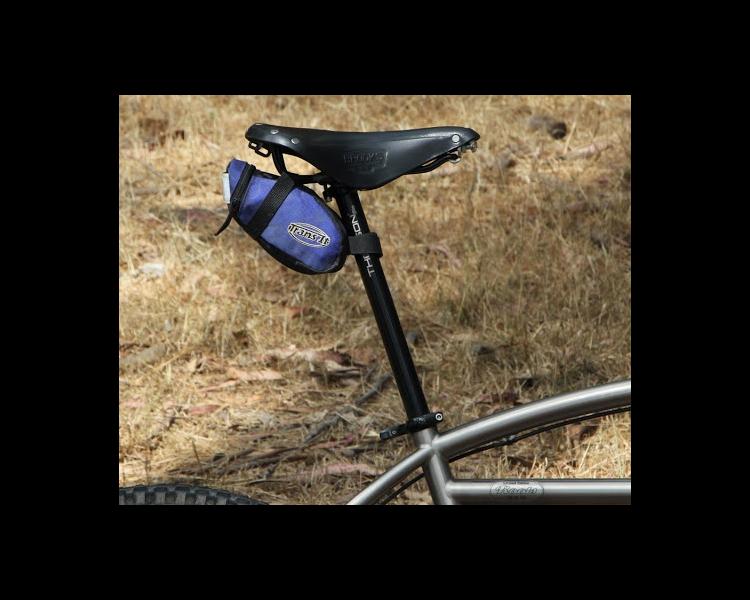 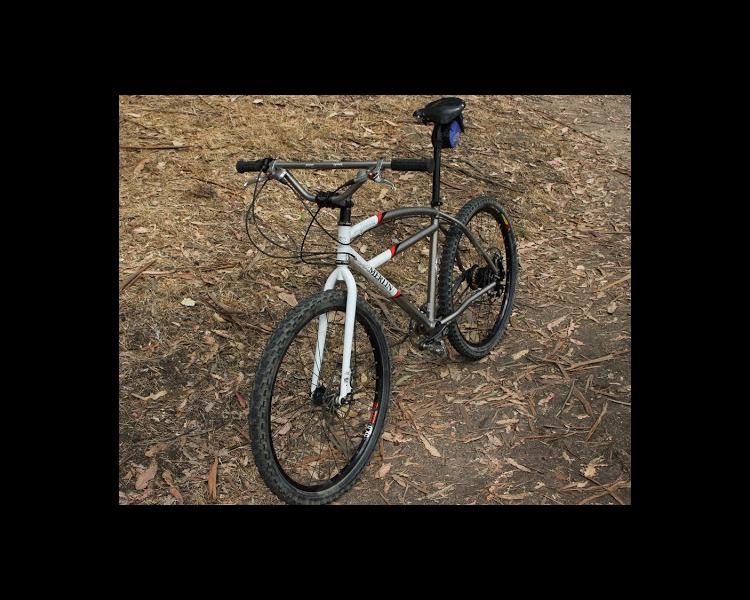 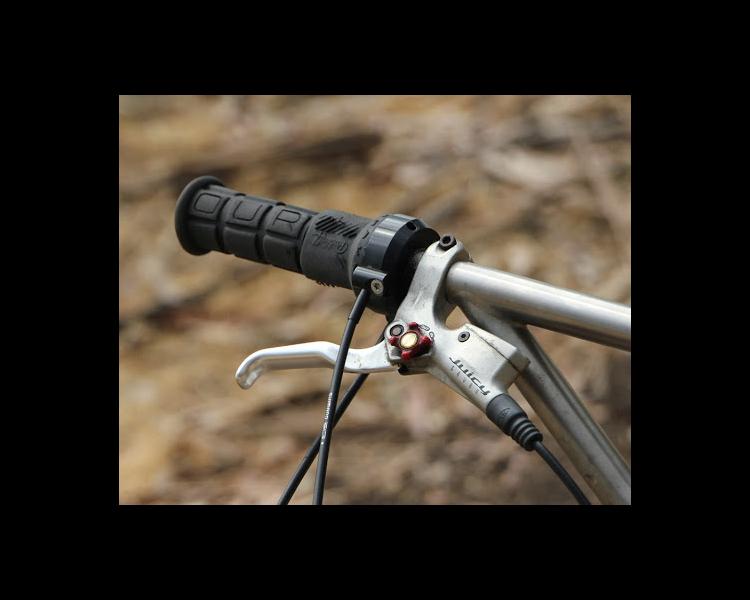 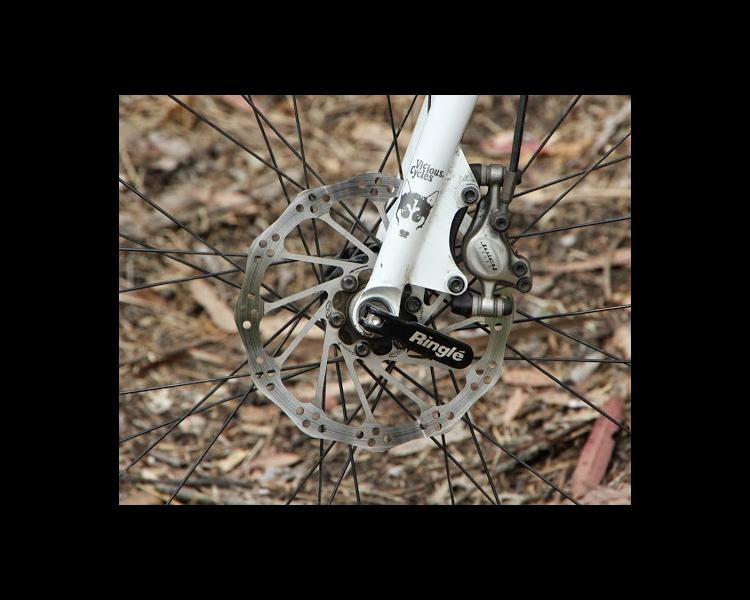 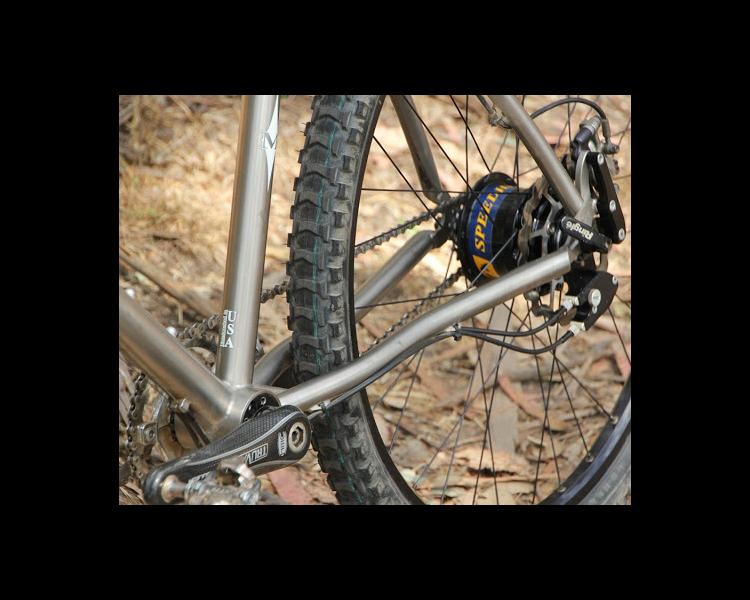 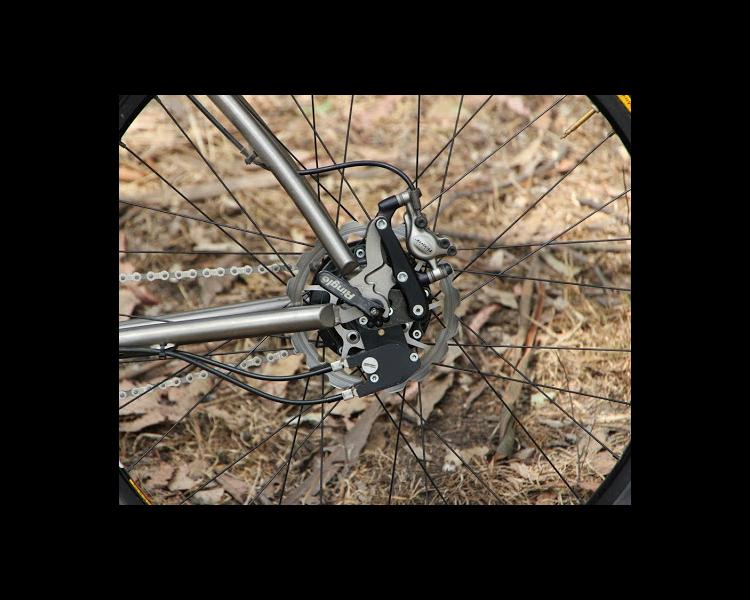 This Merlin Roots came in to the Monkey Lab for routine service, and we were excited to check it out. Offered as a limited edition, the frame is modeled after the original west coast "Klunkers," the home-made dirt cruiser bikes that were ridden at breakneck speeds by the pioneers of mountain biking on the dirt roads and hiking trails of Marin County's Mount Tamalpais. Although the aesthetic of the bike is similar to early Klunkers, it's equipped with modern geometry, materials, and technology that didn't exist in the early days of mountain biking, including a Rohloff SPEEDHUB 500/14 and hydraulic disc brakes. This bike's owner was initially drawn to the bike because of its form, but his first few rides confirmed it is also an extremely functional ride.The frame was built by Merlin Metalworks, one of the most respected of the early East Coast mountain bike frame builders, who is know primarily for their work in titanium. Merlin’s pioneering craftsmanship set the standard for high-end titanium mountain bikes in the 1980s and 90s and created a niche for titanium enthusiasts that continues to this day. This frame, named Roots, was styled after their classic Newsboy model, which debuted in 1994 and became a cult classic due to its striking retro looks. The Roots model was introduced in 2005 with a limited run of 50 bikes. Each of the these 50 bikes was built with a Rohloff SPEEDHUB, Rohloff-specific cable routing, and an eccentric bottom bracket to accommodate chain tension.The original Klunkers were re-purposed Schwinn cruiser frames. These bikes were generally single speed and equipped with coaster brakes, wide swept back riser bars, springer saddles, and over-sized 26 inch balloon tires. Compared to most "high end" bikes of the time, they did an adequate job of getting down the mountain, but the downhills were often nerve racking due to frequently over-heating coaster brakes and a complete lack of front brakes. They also lacked lower gears for pedaling back uphill, so they were often pushed up the hills. With the Roots project, Merlin set out to preserve the simple, playful feeling that made the Klunkers so much fun to ride but add more functionality to handle longer, more technically challenging rides.Beyond the frame, the Rohloff SPEEDHUB is the highlight of this bike, giving it the gear range of a modern mountain bike derailleur system with the durability to keep rolling year after year with minimal upkeep. The Roots also features Avid Juicy Seven hydraulic disc brakes, which are immeasurably more powerful and responsive compared to the Morrow and New Departures coaster brakes found on many of the original Klunkers. It includes a range of top shelf components to keep the weight low, including Truvativ Stylo carbon cranks, Seven Cycles 2 piece titanium riser bars, and a Thomson Elite seatpost. It was outfitted with a bombproof Chris King headset, double-wall Sun Ringle rims, and a well worn leather Brooks B17 for comfort.The owner of this bike is very proud to own one of only 50 beautifully crafted Merlin Roots in existence, and we were glad to be able to showcase it here on the Monkey Lab. If you’re considering a similar retro-styled mountain bike of your own, contact us to see what we can put together for you!Build Details:• Frame: Merlin Roots Titanium• Fork: Viscious Cycles Mountain Steel• Headset: Chris King NoThreadset• Stem: Truvativ Team• Handlebar: Seven Cycles Titanium Mountain Riser Handlebar• Shifter: Rohloff• Grips: OURY• Seat post: Thomson Elite• Saddle: Brooks B17• Seat Clamp: Salsa Flip Lock• Front Hub: Paul Components Engineering• Rear hub: Rohloff SPEEDHUB 500/14• Spokes: Sapim Race• Nipples: Sapim Brass• Rims: Sun Ringle 0 Degree XC 2000• Tires: WTB Velociraptor• Cranks: Truvativ Rouleur Carbon• Pedals: Shimano SPD• Bottom Bracket: Truvativ• Chain ring: Surly Stainless Steel• Rear Sprocket: Rohloff• Chain: SRAM PC 971• Brakes & Levers: Avid Juicy Seven• Rotors: Avid Cleansweep front, Galfer rear