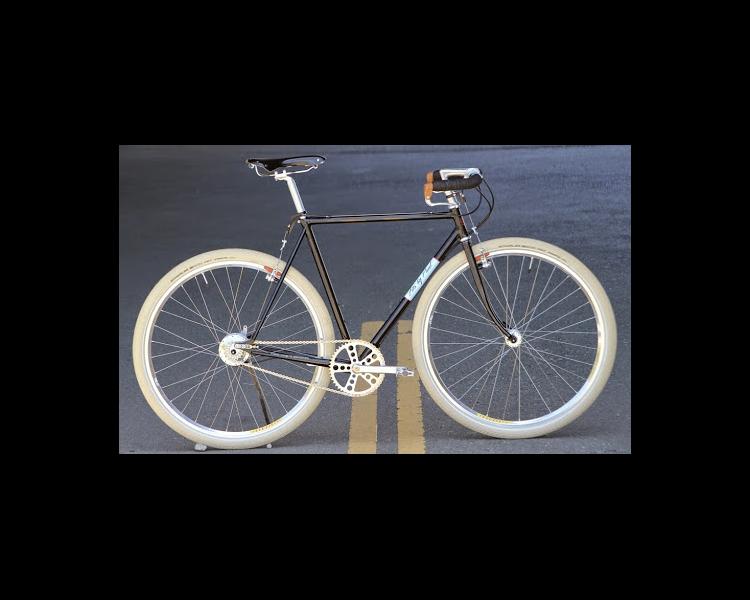 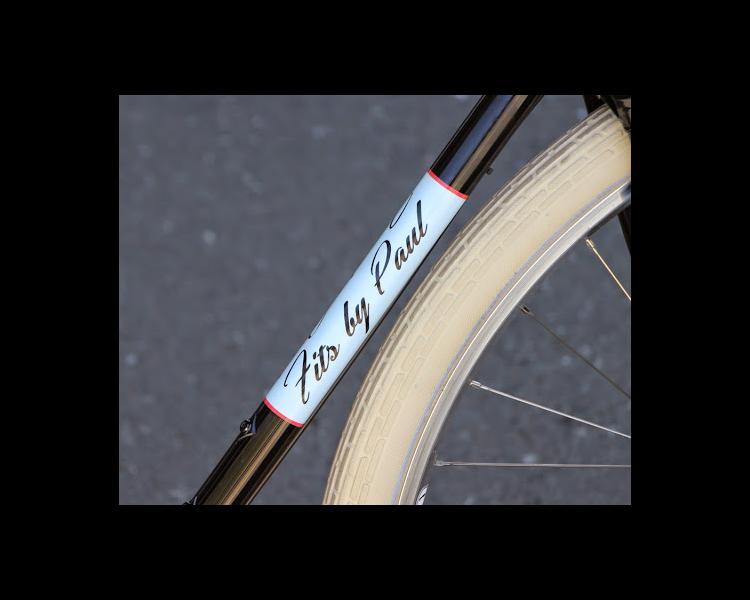 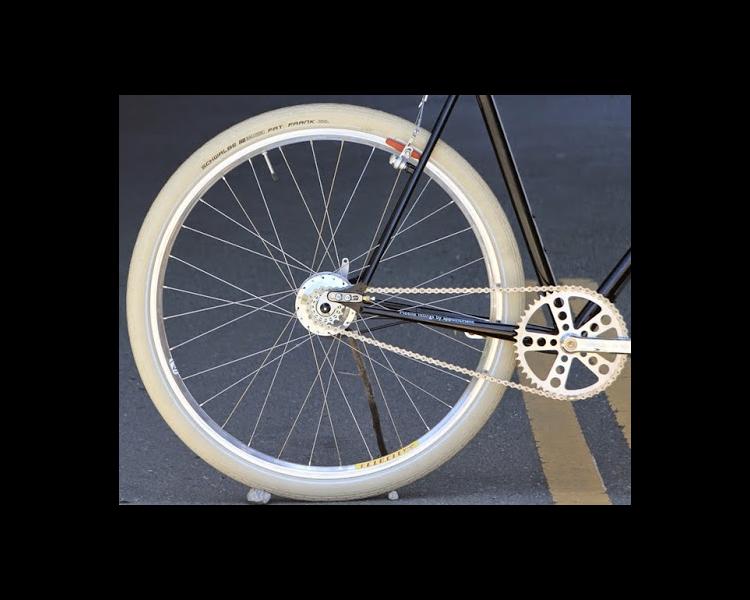 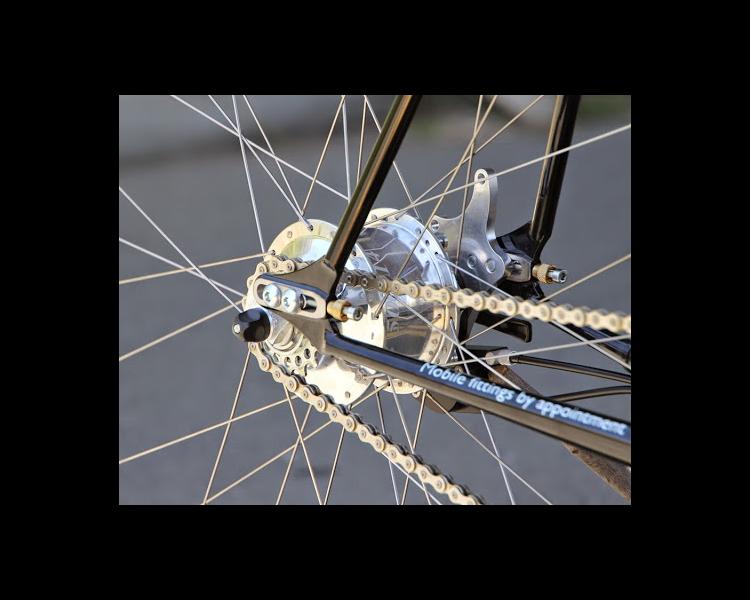 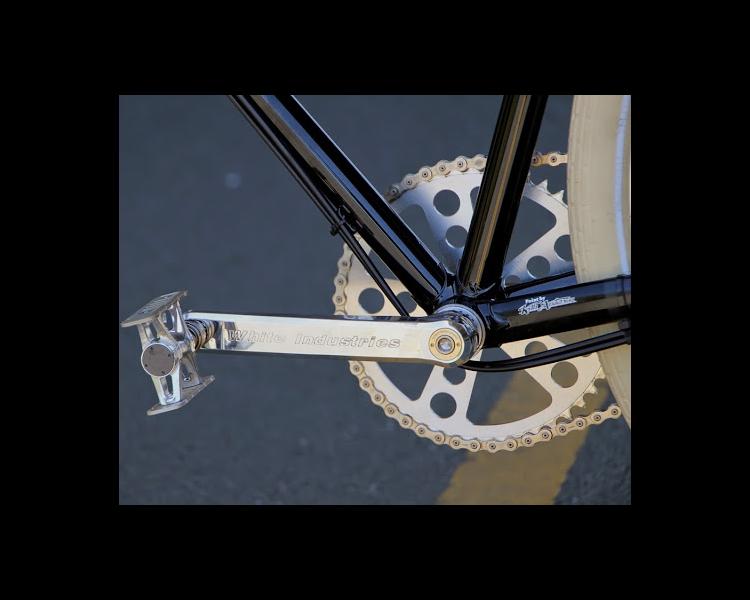 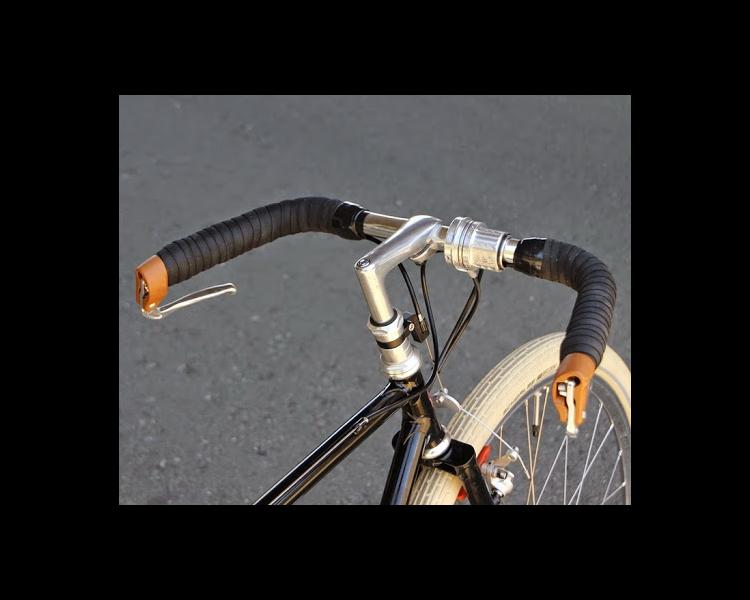 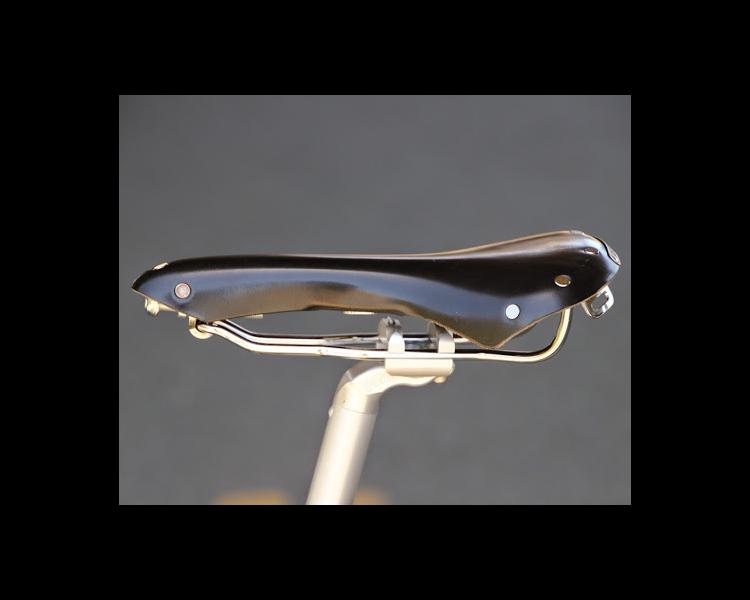 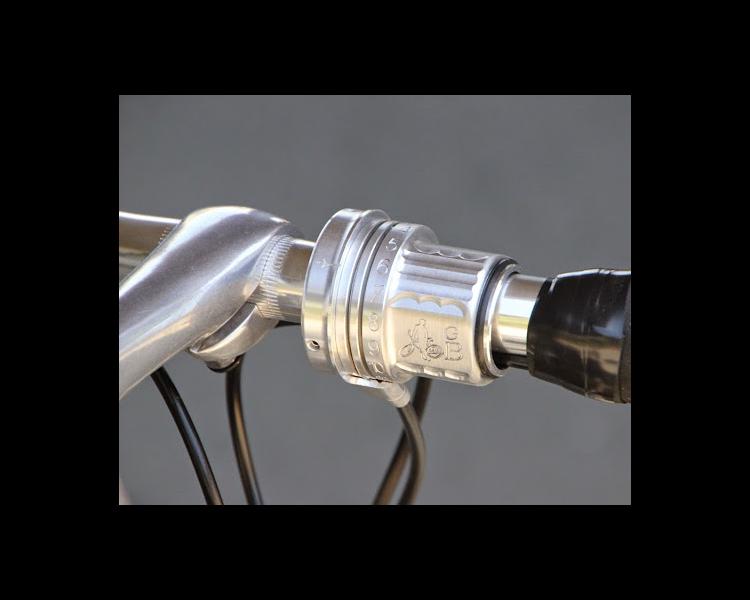 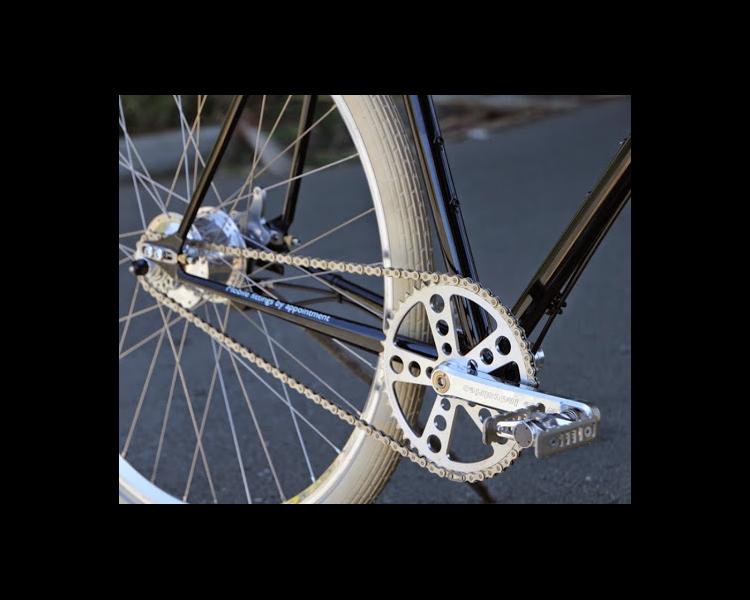 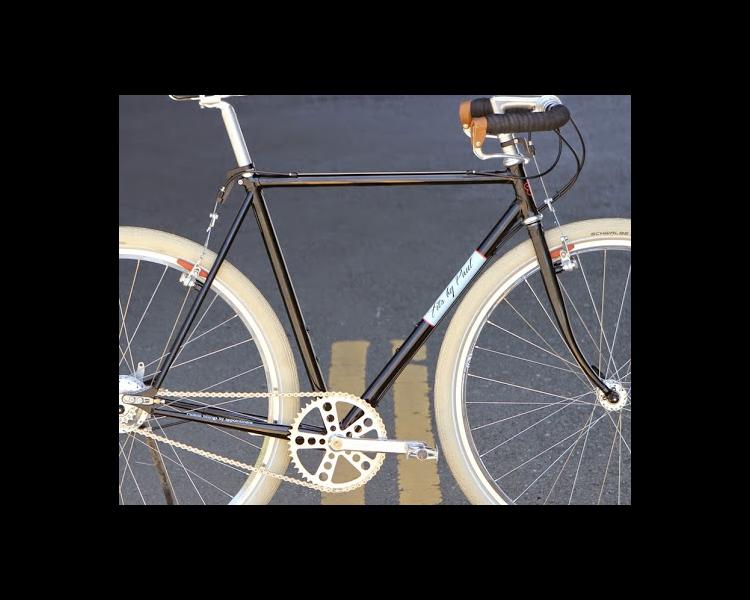 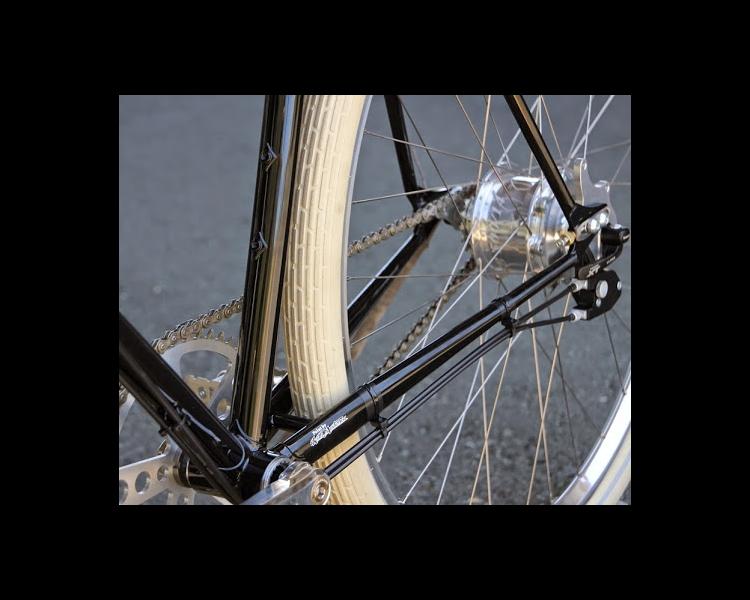 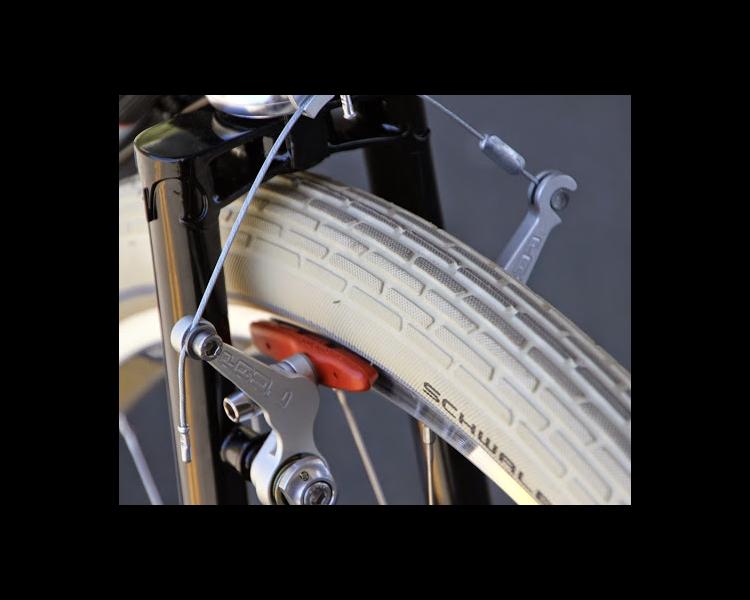 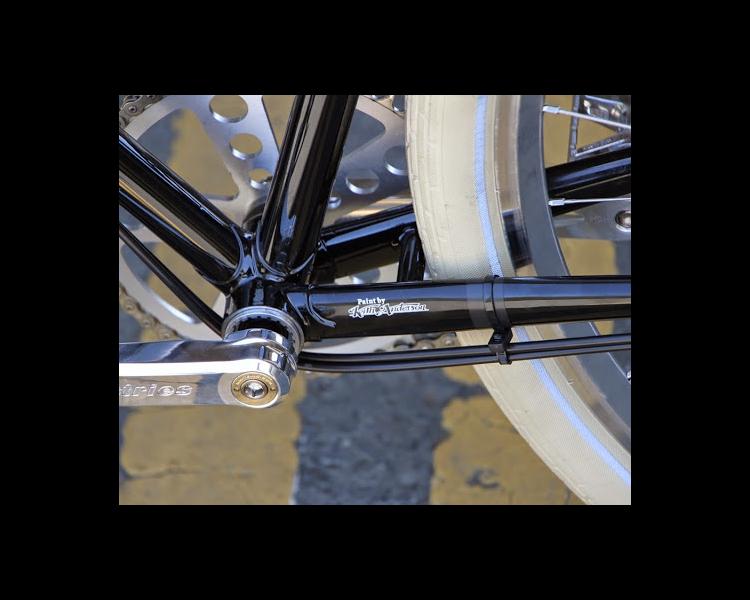 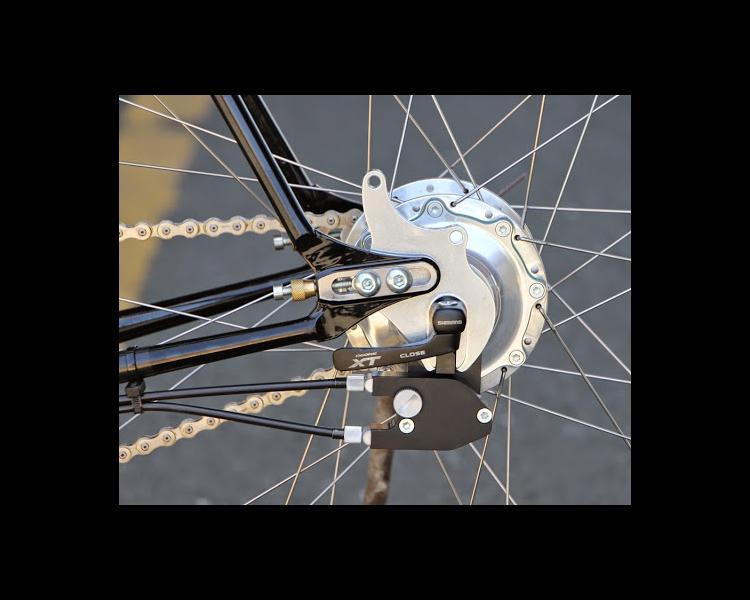 We assembled this striking commuter bike for a local customer named Paul, who runs a bike fitting business called Fits by Paul in Marin County. He is an accomplished road rider and works with his customers to fine tune the fit of their road bikes for comfort and to prevent injuries while riding. For the times when he’s not riding his road bike, he wanted something more casual that was also trouble-free for riding around town. As a first for us, the customer built the frame himself while attending a bicycle frame building course.  After the frame came back from the painter, he brought it to us with some of the parts, and we helped him plan out the rest of the build centered around a Rohloff SPEEDHUB 500/14 internal gear hub. We supplied the missing parts, built the wheels, and assembled everything into a complete bicycle.Paul attended the United Bicycle Institute (UBI) frame-building course in Ashland, Oregon, where he learned to miter and braze steel tubes to create a complete frame. He designed the frame to be both comfortable yet lively for speedy trips around town. It was modeled after classic steel city bikes with a threaded one inch headset standard and brazed lugs instead of welds. Paul also built the frame with a few special touches, including Rohloff-specific cable routing and Paragon sliding dropouts to adjust chain tension. After learning the methodology of building a lugged frame and putting his dream build together, he had the frame painted by Keith Anderson Cycles with decals to help promote his business.We started the wheels with Velocity Dyad rims, which have are reasonably wide for a road-oriented rim (24mm) and laced them up with Sapim Laser spokes and brass nipples. Paul chose a silver Rohloff SPEEDHUB for the rear hub and a Phil Wood road hub for the front. The wheels came together perfectly and afford a nice blend of light weight and strength for daily commuting. To top it off, we mounted some eye-catching cream-colored Schwalbe Fat Frank ballon tires, which push the limits of clearance under the down tube but will provide a nice, comfortable ride.The Rohloff SPEEDHUB 500/14 is ideally suited for commuter and city bikes. As bikes that typically lead a hard life but must be reliable to be of service, the SPEEDHUB is a natural choice for the drivetrain. The only maintenance this drivetrain typically needs is an annual oil change, which can easily be done by the rider at home. This helps you avoid time consuming service visits, downtime while the bike is at the shop, and most of the frequently needed replacement parts and adjustments. The SPEEDHUB remains reliable for years and years and rarely requires serious maintenance. Rohloff's hubs take most of the interruptions out of the equation of owning a transportation bike.Paul wanted the majority of his build to feature top quality, mostly American-made components. We were happy to accommodate this request and turned to a few local Northern California companies that we often utilize for custom builds. White Industries, based in Petaluma, provided the cranks and chain ring. Paul Components of Chico, supplied the brakes. Their wide touring cantilevers allow plenty of clearance for the fat balloon tires. Phil Wood in San Jose supplied the front hub. Rim supplier Velocity also manufactures in the in US.This build came out great, and Paul was very pleased when he came to pick it up.  If you’re looking for a new commuter or city bike of your own, contact us to start a conversation about what we can put together for you!Build Details:• Frame: "Fits by Paul" custom-made• Fork: "Fits by Paul" custom-made• Headset: 1” Threaded• Stem: Nitto quill• Handlebar: Nitto Promenade• Shifter: Gilles Berthoud• Saddle: Brooks B15 Swallow• Front Hub: Phil Wood Road• Rear hub: Rohloff SPEEDHUB 500/14• Spokes: SapimLaser• Nipples: Sapim Brass• Rims: Velocity Dyad• Tires: Schwalbe Fat Frank• Cranks: White Industries VBC• Pedals: MKS Promenade EZ• Bottom Bracket: Shimano UN55• Chain ring: White Industries• Rear Sprocket: Rohloff• Chain: Wippermann 7R8• Brakes & Levers: Paul Components Touring Canti