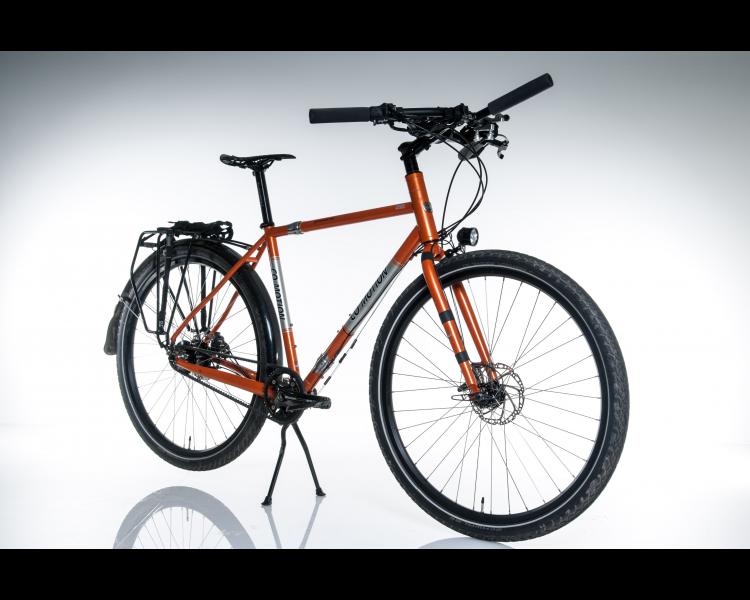 This Co-Motion Divide belongs to an avid bicycle tourer from Carson City, NV, who frequently spends time traveling and riding in Asia. The bike was purchased complete from Co-Motion, and the customer later stopped into Cycle Monkey to have his wheels rebuilt with sturdier rims. This build is perfectly suited to long-range tours with its strong steel frame frame, low-maintenance drivetrain, and dynamo lighting system.

As a dedicated touring bike, the build is optimized for long journeys far off the beaten path, with intuitive geometry and a wide host of accessories that provide extra convenience and comfort on extended bouts away from home. For someone who spends so much time riding in remote locations, the reliability of the Gates Carbon Drive belt system paired with the Rohloff SPEEDHUB 500/14 internal gear hub made them obvious choices in terms of drivetrain. 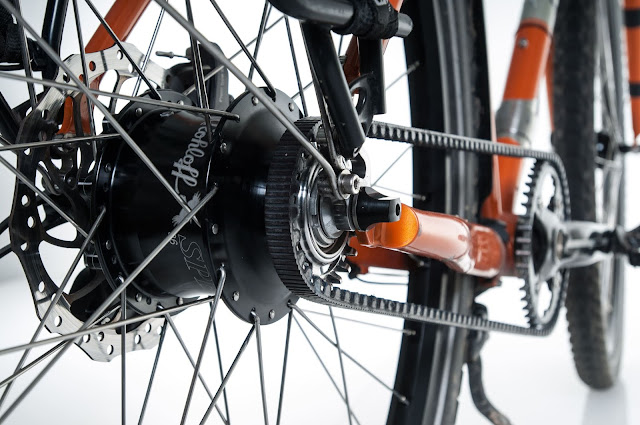 Co-Motion Cycles specializes in building bikes for touring, commuting, and tandem riders at their factory in Eugene, Oregon. They are a prominent supplier of Rohloff bikes in the US, offering several complete touring bikes equipped with these high-quality gear hubs.

The Divide model seen here is optimized for exploring rough roads and covering long distances under load. Co-Motion goes so far as to suggest that “if you can make a line on Google Earth, chances are the Divide can handle it.” Named for the rugged Great Divide touring route that stretches nearly 3,100 miles from Banff, Alberta, to Antelope Wells, New Mexico--with less than 10% of the route on paved surfaces--the bike’s Reynolds 725 steel tubing is intended to stand up to the rough stuff with a sure-footed stride. 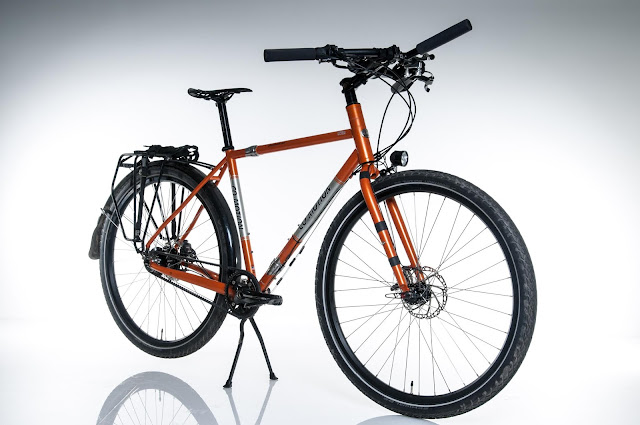 The Divide accepts 29” or 700c wheels up to two inches wide, features plentiful rack and fender mounts along with three bottle mounts, and runs a steel uni-crown fork that maintains excellent handling characteristics under heavy touring loads. While the stock geometry is dialed to provide the perfect balance of comfort and performance on long and bumpy journeys, geometry can also be tailored to your exact preference through Co-Motion’s custom sizing program. This rider also opted for the framebuilder’s optional stainless steel dropouts, which add a touch of elegance to the bike while also eliminating pesky paint chips that occur when removing and reinstalling the rear wheel.

Co-Motion is also the first frame manufacturer to offer S+S bicycle torque couplers, which allow frequent travellers like this customer to split their frame when packing the bike for transport. Interlocking tapered teeth are drawn together by a threaded lock ring, providing an extremely rigid joint with minimal tightening force. 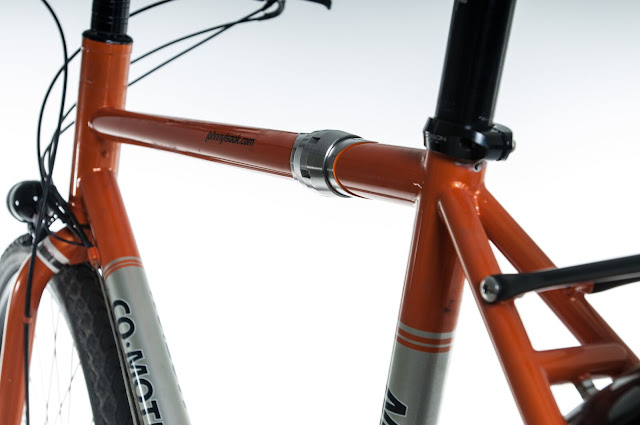 While splits in the primary frame tubing might raise questions of reliability at first glance, the reality is that a well-built coupled frame is actually stronger than an otherwise identical, single-construction frame. With S+S couplers, you can check your bike as regular baggage, greatly increasing the convenience of touring in far off landscapes and continents. Co-Motion offers this “Co-Pilot” option on all of their frames, along with a complementary travel case.

In addition to the touring-friendly features of the frame itself, the Divide is also one of a handful of bikes that can be purchased stock with a Rohloff SPEEDHUB and Gates Carbon Drive belt system. These drivetrain components are our first recommendation for any rider looking to take on a serious bicycle tour, thanks to their unparalleled reliability, low maintenance burden, and consistent performance in all weather conditions.

Rohloff has long been considered the cream of the crop in terms of internal gear hubs, with 14 speeds encased in an entirely sealed unit that provides consistent shifting performance through mud, muck, or other malice without the need for adjustments or regular maintenance. The 526% gear range ensures you can climb the steepest hills under a heavy touring load, and the internal nature of the gearing maintains a straight drive line that facilitates the use of belt drive systems, which are incompatible with derailleur-based drivetrains. 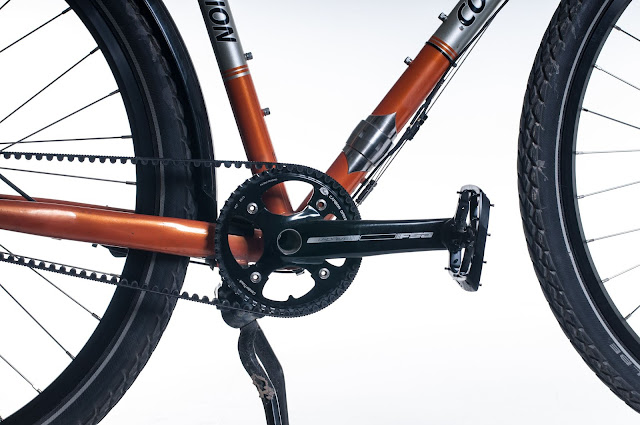 Belts offer a range of tangible benefits over chains. They require no lubrication and have a functional lifespan at least twice as long as a conventional chain. They do not rust in inclement weather, and cleaning them after a muddy ride requires nothing more than a quick rinse with the hose. Gates Carbon Drive has long produced belts for everything from motorcycles to heavy machinery, and their depth of experience makes them a clear market leader when it comes to the best belt systems for bikes. In terms of both long-term reliability and the reduced need for regular adjustments, the Rohloff/Gates combo is a trusted option for those who don’t want to spend their bike tours tinkering with drivetrain parts.

This rider brought his Divide to the next level with a huge range of aftermarket accessories to increase comfort and convenience. Readers will be quick to notice the unique handlebar setup, which features a Jones H-Bar along with the Gnarwhal--a minimalist, touring-specific aero bar with an unusual aesthetic evocative of its single-tusked, sea-creature namesake. Intended to be paired with the H-Bar, it allows riders to comfortably maintain a significant aerodynamic advantage by resting their forearms across the crossbar and loop portions of the bar. 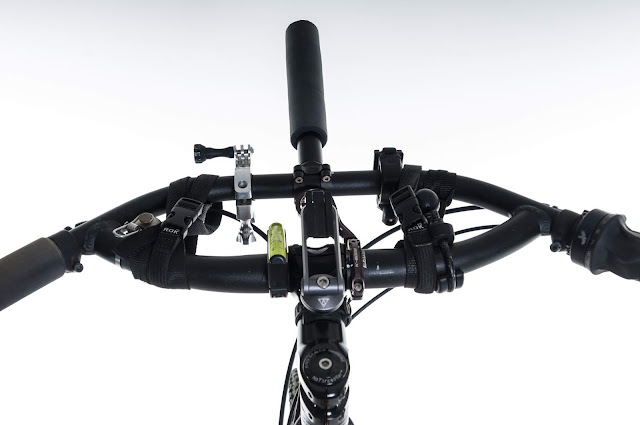 The front wheel is laced around a Schmidt SON 28 dynamo hub, which contains a small converter that converts energy from the moving wheel to power lights and other electronic accessories such as GPS devices. These self-generating power sources offer obvious benefits for those venturing beyond easy access to electrical outlets, or those who simply never want to worry about charging their bike lights ever again. On this bike, the hub provides power to Schimidt’s powerful Edelux II front headlight and SON rack-mounted tail-light. 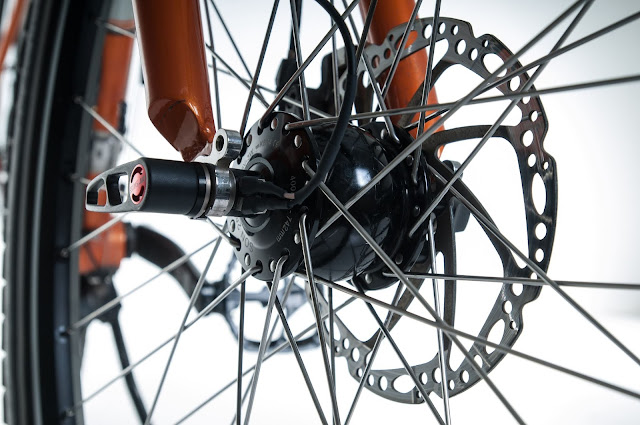 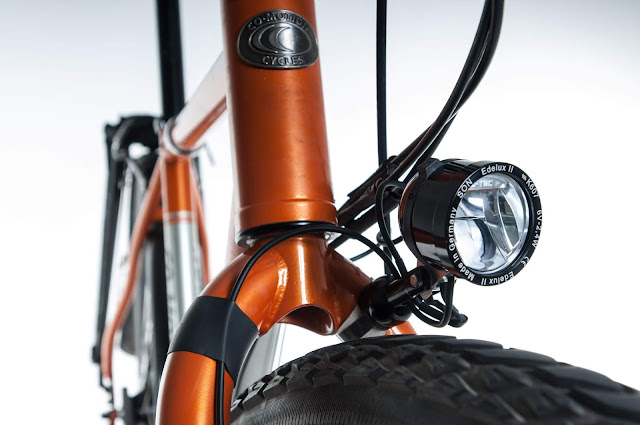 Kickstands are often scoffed at as something for kids’ bikes and cheap commuters, but the reality is that they’re invaluable to touring riders who often need to keep their bike upright while adjusting their loads or reaching for crucial items from the panniers. A double-legged option like the one seen here is the best option, as it keeps the bike balanced despite the uneven weight distribution that’s inevitable while loading up.

We were thrilled to work on such a well-executed touring setup, and love helping customers bring their dream builds to life. If you’re interested in building up a Co-Motion or other internally-geared touring bike, don’t hesitate to drop us a line. To stay up-to-date with the latest bike builds and tech tips coming out of the Monkey Lab, be sure to follow us on Facebook and Instagram.